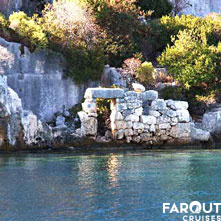 About Tersane Island
Tersane Island is the largest island in the Gulf of Fethiye and is often also called Dockyard Island. Tersane Island was once Greek populated and was deserted back in 1923 with the agreed population swap between Turkey and Greece. Today you can still find the ruins of their abandoned homes scattered all over this picturesque island. The Ottoman Navy used the island as a dockyard during World War I, thus giving its name. Here they built many ships and you can still see the only Seljuk-built shipyard remaining in Turkey. The island is surrounded by the beautiful crystal clear waters to take a dip in after your exploration.

How to get to Tersane Island

Being the largest island in the Gulf of Gocek and Fethiye, Tersane Island is easily accessed by boats and gulet cruises. Because it has a 100m wide channel it provides an easy entry to all boats. Tours visiting this area include the Fethiye to 12 Islands cruise and the Fethiye to Marmaris cruise.

Tersane Island’s ancient name used to be Telandria before the First World War. However, when the Ottoman fleet started using it as their port during the First World War, the name was changed to Tersane Island. The world Tersane means “dockyard”. Still, the rocks of original dockyard can be found lying in the sea. Once, the island used to be inhabited by the Greeks who later in 1922 migrated to Rhodes Island in part of Greek/ Turk population exchange treaty. Some 140 houses of that Greek community can still be found in the ruins along with the tomb of their ancient chief, two churches, their descendent goat herds and their fruit orchards.

Things to do in Tersane Island

In the northwestern corner of the island, there is a well-protected bay where tourists can find an amazing place to relax and enjoy the gentle breeze. Bring a picnic blanket along with a book and you will be set for hours. The harbour is comparatively shallow here and great for families who have young children wanting to have a dip. It is believed that the area used to be a shipbuilding and repair harbour in the past so we suggest grabbing a snorkel and exploring the area.

Overall, Tersane Island can be a good place to visit as part of a gulet cruise and nearly every yacht charter take their guests to the island. As part of these gulet cruises, you may also visit Oludeniz, Butterfly Valley, Cleopatra Bath, Twelve Islands and Yassica Island.