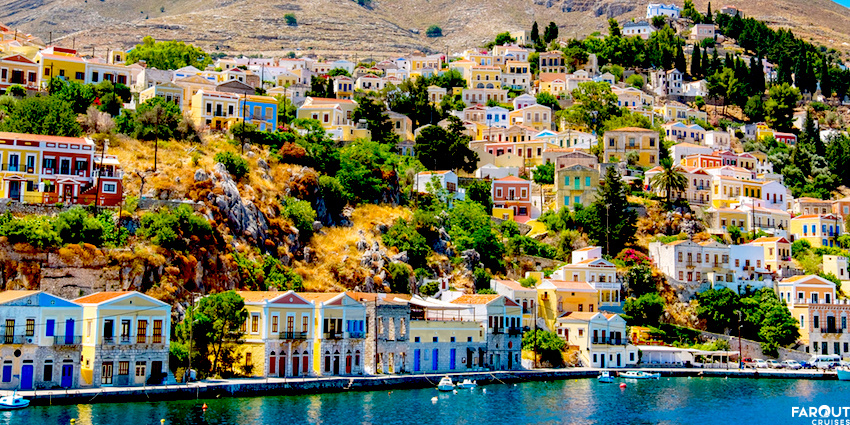 Symi Island, Greece, is just a few miles off the Turkish South West Coast. It is one of the Dodecanese Islands within the Rhodes regional unit. The larger island of Rhodes is 25 miles away but Turkey is even closer; Datca and Bozburun. Its winter population is now just 2.500 but numbers grow in the summer, tourists and extra workers to cater for their arrival. There may be an additional 6,000 at any one time.

It is a mountainous island, little more than 20 sq. miles. There are small coves and beaches on an otherwise fairly rocky coastline. The main town bears the same name, Symi and is in the north east. The harbour is the lower part of town while the upper part is often referred to as Horio or Ano Symi.

The tourist season lasts from Easter until Panormitis Day, a religious celebration early in November. Panormitis, a village on the island has a famous monastery which many, especially Greeks, visit annually.

In the 14th century is conquest by the Knights of St. John began a period of prosperity which continued under the Ottomans. It became famous for its sponges and by the middle of the 19th Century the evidence was clear to see; neo-classical mansions on the slopes near the town. It originally remained with the Ottomans even after the formation of an independent Greece and although changing hands several times in the 20th Century it finally became Greece permanently in 1948.

Many old houses have been restored under strict guidelines from the Greek culture ministry's Archaeological Service.