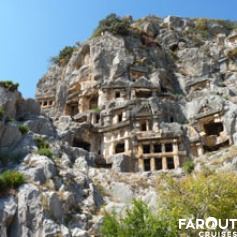 Demre was known in ancient times as the Roman city of Myra and home to St Nicholas. Today you can still visit the impressive tombs of Myra with an amphitheatre and many relics. The original church of St Nicholas also attracts many pilgrims throughout the year. To this day, Demre is also very well known for its agriculture and greenhouses growing tomatoes, some of the best you will eat in Turkey, along with pomegranate and citrus fruits. They also grow plenty of other vegetables all year-round and supply to the local markets in the region.
Demre also has a major harbour, called Andriake, where the popular [Olympos to Fethiye blue cruises](http://www.faroutcruises.com/blue-cruise-turkey/olympos) depart from after a short bus ride from Olympos valley. Demre is also host to the annual camel wrestling festival in January which travels along the coast from Selcuk. This festival has been running for over a century.

St Nicholas in Demre’s History
A 4th-century Bishop of Myra/Demre, St Nicholas, was born in nearby Patara, rose to the rank of a bishop in Turkey. St Nicholas was known for his giving nature and had a reputation for secret gift-giving. For all his good work, he was transmuted into the jolly Christmas elf called Sinterklaas in Holland and in other European countries. Later he was called Santa Claus in North America.

It is believed in the legend that St Nicholas would drop small gold coin bags down the chimneys of homes of poor females who were old enough to marry but did not have a dowry. It is also found in the legend that he had to leave gold coins in the shoes of the poor people who put them out for him. For all his great and gracious works, he became the patron saint of virgins, pawnbrokers, children, sailors and Holy Russia. Hence, many tourists from all over the world visit this region and visit St Nicholas Church and the Ancient City of Myra.

How to get to Demre

This small town is located on the highway D400 which connects Antalya in the east and Fethiye in the west along the Lycian coast. There are buses running from town to town and tourists can easily get to Demre from Antalya or Fethiye by bus. There are other popular travel destinations around Demre. It is located 80 km (50 miles) southwest of Çıralı and 50 km (31 miles) east of Kaş.

Things to do in DemreIt is true that Demre doesn’t offer limitless things to see and do like other travel destinations in Turkey. But it has some very unique attractions for what tourists visit this small town in a good number

rs. As mentioned before, it is the town where Santa Claus, St Nicholas lived. This makes the Church of St. Nicholas one of the must-visit tourist attractions in Demre. The church was built to pay honour to him. Although he was originally buried here, his bones were stolen and taken to Italy back in the 11th century. But the architectural beauty of the church along with gorgeous Byzantine frescoes and mosaic floors makes it an evocative place to visit.

The Rock Tombs of Myra is perhaps the most popular and most visited attraction in Demre. The Rock Tombs, which date back as far as 4th and 5th century BC, have been carved directly into the rock face. Tourists can find a well-preserved Roman theatre and other ruins just beside the Rock Tombs.

Arycanda is another ancient site which offers tourists some of the best-preserved Roman and Greek ruins on the Lycian Coast. Among the rocky and green mountainous landscape, one can discover the ruins of a stadium, Roman baths, two necropoleis, agora, odeon and a theatre.

Not far from the town of Demre is the small fishing village of Ucagiz. This is a great place to visit once you have seen all you can see in Demre. Following your trip to Demre, a short stay in either Kas or Antalya should be on your list of things to do.